Despite some of the worst weather in the 35-year history of the DD, including rain most of the ride, a 34° F starting temperature and 43° at the finish, about 280 brave riders started the 2018 DD from a new location—the Rhododendron Shelter in Highland Park on Lake Drive. The riders left in seven groups. For the first time the women had the option of competing in their own separate group, and were scored ten places deep. Missing this year were defending champ Ian Baun, who broke his shoulder two and a half weeks before the DD, and the top three women from last year. This guaranteed new winners for the two competitions. Before the start, I had a moment of silence for three friends who passed away this year: 69-year-old Mark Powder, who created the ACA in 1972, was an official with Gary Bywaters, used to score points on the DD, and more recently drove me to the Bud Harris Cycling Track to ride my handcycle; 25-year-old Austin Bible, who had ridden the last two DD's; 72-year-old Steven Leonard, conductor Eddie Leonard's father. Eddie rode his fifth DD this year and was a ranger.

In the open competition, Will Cooper, who placed second as a rookie last year, easily won the first three hills by big time margins. On the fourth hill—High St./Seavy Rd. in Etna—he was far ahead, and missed the second switchback turn, going straight instead. Realizing his mistake, he put a foot down, turned around, and still caught and passed every rider to be first over the finish line. But his actions were disqualifying, so he had to redo the hill. He fell so far behind that by the time he got to Logan, the lead group was already coming back down as he started up the hill. So he scored no points on the fourth and fifth hills. Unlike other years, Logan was an up-and-down hill done before the lunch stop. Bob Stumpf and Xavier Szigethy won the fourth hill, putting Stumpf into the lead by two points over Cooper. Stumpf kept the lead through the sixth hill.

On the seventh hill, Suffolk/Hazelton/Burgess, rookie Aaron Coxen briefly took the lead by one point over Cooper. Cooper won the eighth hill, Sycamore, and retook the lead, then increased it to the end, winning a total of nine hills. Rookie Coxen finished second, just three points ahead of Nick Glavac, who came in third. Riding his tenth DD, Stumpf finished fourth. Having placed close behind eleven-time DD winner Stephen “Steevo” Cummings for many years, Bob told me Cooper was every bit as impressive as Steevo was at his best—able to drop all riders at will! Here is a photo of six of the top open competitors with me atop of the last hill: 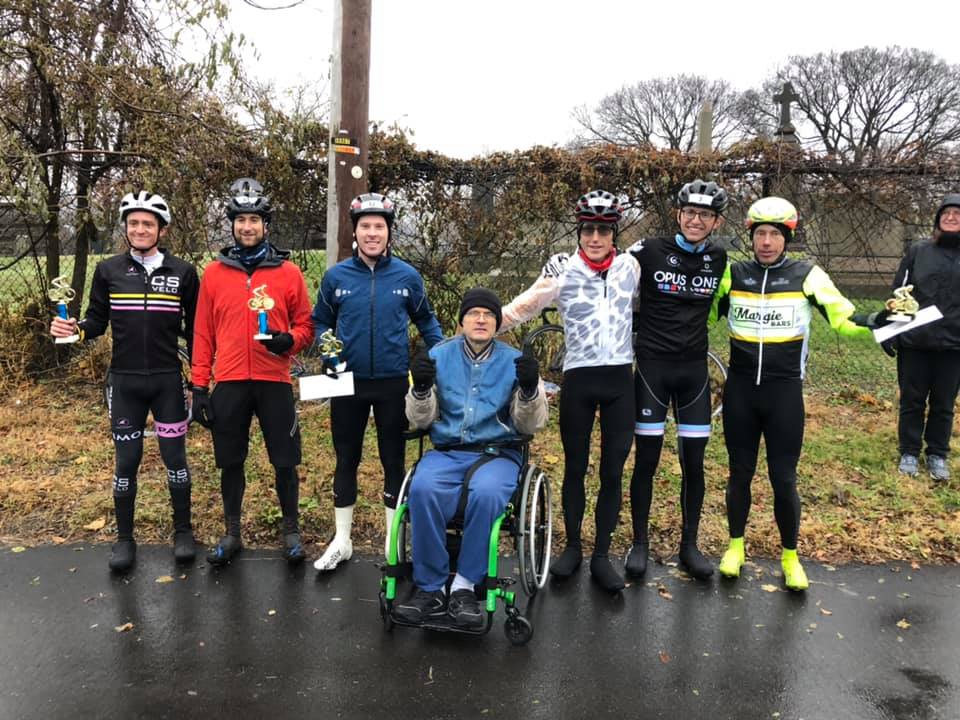 At the lunch stop in Millvale, Nate Ricketts told me he was riding the same bike he cracked on Welsh Way last year. Because the manufacturer's warranty did not cover the damage, he fixed the frame himself with epoxy.

Among competing riders age 40 and over: 57-year-old Jonathan Pratt took 14th place in the overall competition; 43-year-old Larry Weber took 15th place; Riding on a single-speed bike again, 44-year-old Rege Ricketts—Nate's father—finished in 19th place; 49-year-old Frankie Ross was 21st; 59-year-old David Hearn tied for 23rd place with three points; 40-year-old David Galati took 25th place; 60-year-old triathlete John Brockenbrough tied for 26th place with one point—extending by another year his record as the oldest points scorer! So seven of the 27 points scorers (26%) were over 40 years old this time! Though undoubtedly capable, eleven-time DD winner Steevo Cummings did not try to score this year, leaving points for others to take. Soon Steevo will join the over-40 contingent.

Having failed to make all of the hills on his heavy Healthy Ride rental bike the last two DD's, Jeremiah Sullivan was back on his Healthy Ride bike, but this time he added clipless pedals so he could pull up. Despite this being his worst-weather DD, he still made all 13 hills this year! Here is a photo of him and his bike with me atop of the last hill: 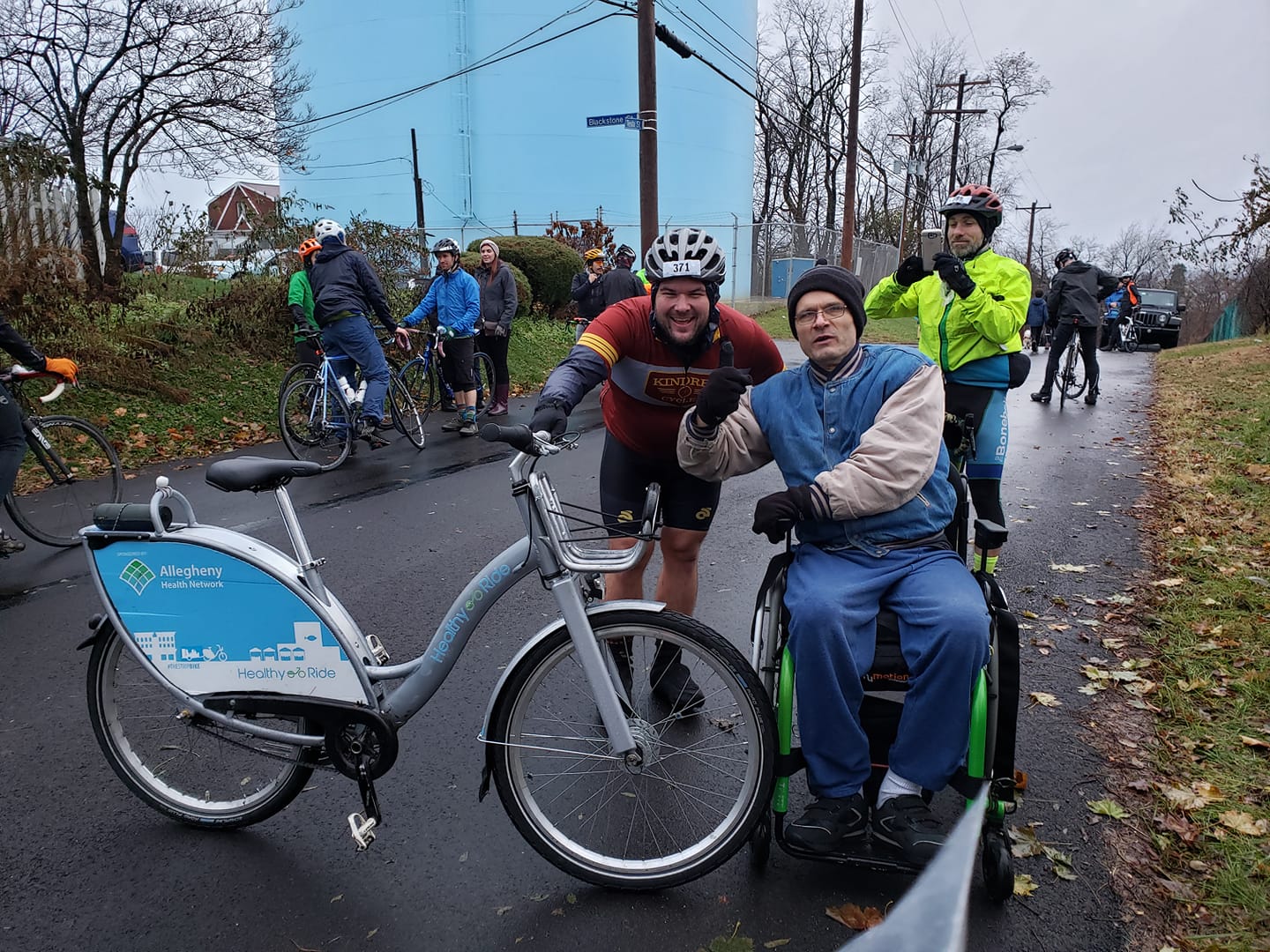 In the women's race, the big news was that for the first time they had their own separate competitive group. Twelve brave women started in this group. Shaena Ulissi, who placed fourth as a rookie last year, dominated by winning 11 hills and scoring 128 points—just two points shy of a perfect score! Using a low gear of 34 x 40, she climbed seated much of the time. This saves upper body strength compared with pushing a larger gear and staying out of the saddle longer. At 4:37 into this Canton Avenue video, you can see her winning by a big margin, seated all the way up. Winning two hills and getting nine second-place finishes, rookie Stephanie Ritter finished second overall. With eleven third-place finishes, Stephanie Swan finished third overall while riding her third DD. Here are the low gears used by the top three women:

Here is a photo of the top six women with me atop of the last hill: 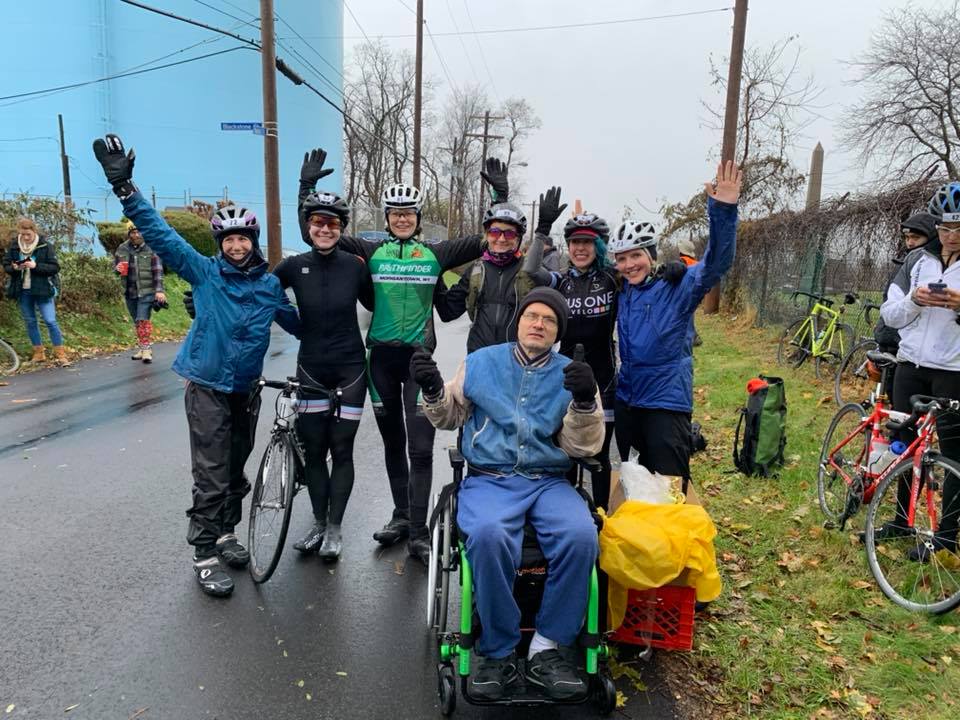 Fourth-place Tanya Hampton finished her first DD last year riding in a non-competitive group. This year she decided to step up and ride in the women's competitive group. Just three feet shy of the top of the fifth hill, Logan, wet leaves crashed her, and she had to redo the hill. At least she had the time to catch back up at the lunch stop in Millvale, where we took this photo:

So Hampton ended up doing 14 hills! She wrote this to me:

"I knew I could do all of these hills, as I made them all on the first year try. At the top of Logan, I could have cried after falling over in wet leaves. I asked myself what am I here for? I wasn't biking in the cold rain all day for nothing. I am here for 'nothing', just to ride as long as I can as strong as I can. I absolutely wouldn't leave that hill without giving it one more shot. I knew I would not have a rest in order to retry that hill. A DD supporter told me to retry it so I did. All day after I completed that hill, anytime one of my 'teammates' (any woman I rode with that day) didn't complete a hill, I encouraged them to try again."

Although not worthy of DD finisher's ribbons, riders who braved the bad weather and rode all the way to the top of the last hill—even if they did not make it up all 13 hills—were still heroes this year; they could have easily quit anywhere along the route. I also want to thank riders—like winner Will Cooper for redoing the fourth hill and Tanya Hampton for redoing the fifth hill—for respecting the rules for being an official DD finisher. 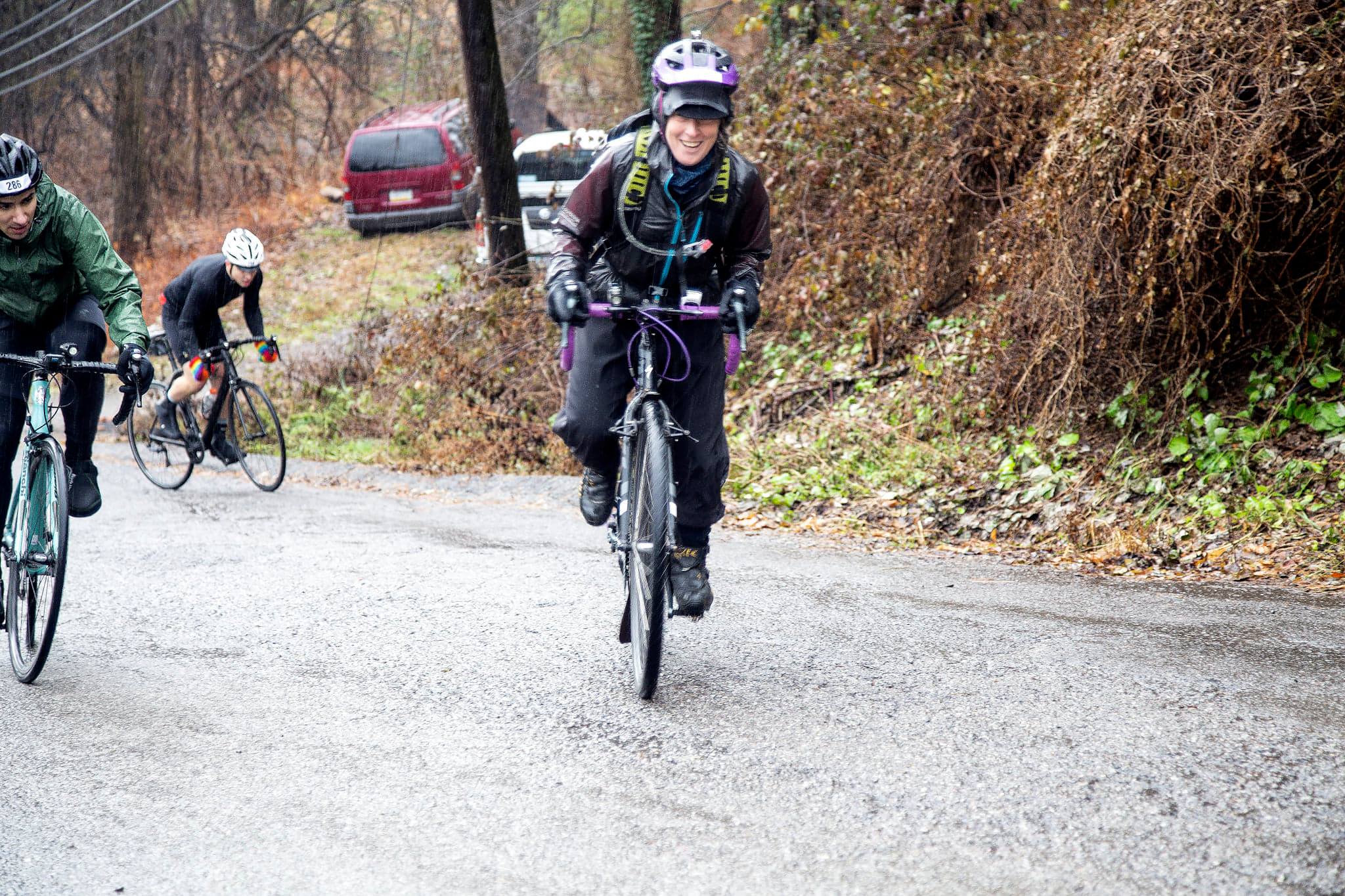 Coached by Bill (Stik) Westover, who rode on a single speed bike again, Damon, a kayaker, trained hard. Jamie Martina used my helmet, scored a bunch of points, but did not make all of the hills. Fourteen-year-old Chloe Tran became the youngest female to ever ride the DD, but she did not make all of the hills. Here is a photo of us atop the last hill: 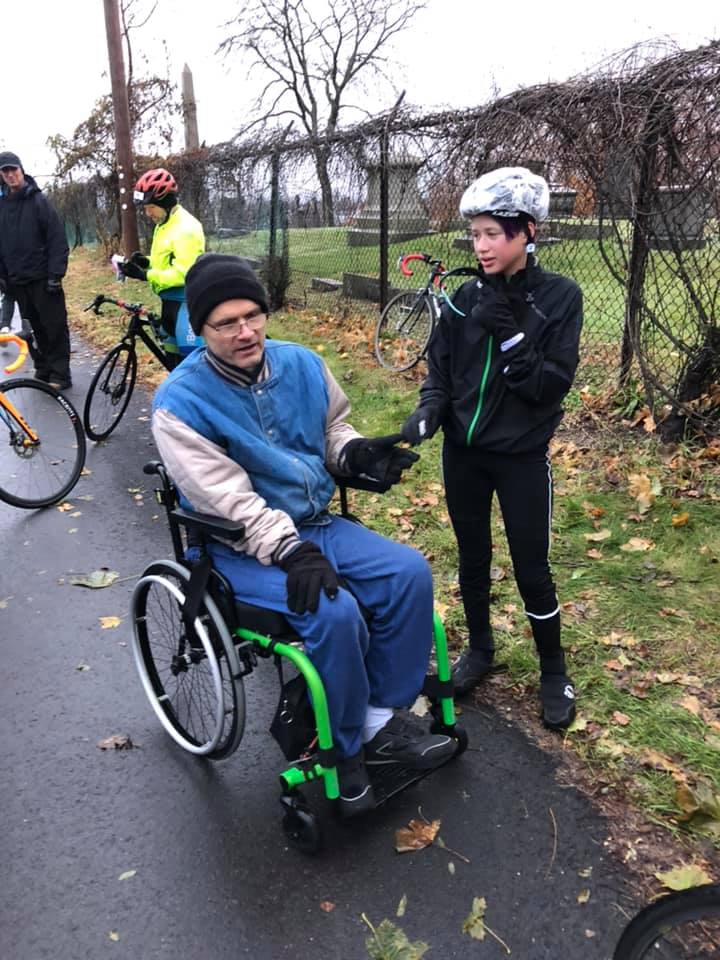 My good friend Mark Hess rode his first DD since 2010. This was his 18th DD, most of anybody riding. However, having failed to make it up Logan, he quit after the lunch stop.

I would like to THANK my huge staff of volunteers: Jonathan Pratt, who helped organize the event, led the first competitive group and blew the starting whistle at the bottom of each hill, and scored points on several hills; Head marshal/ranger Chris Helbling, who helped organize the event, planned the route, created the different groups of riders, trained the marshals to keep the DD safe, and led one of the groups; Other rangers/marshals including Neil Donahue, Jason McCullough, Jim Logan, Ken Mowry, Ted King-Smith, Eddie Leonard, De'Anna Caliguri, Doug Reigner, Dan Reigner, Carl Hubel, Kieth Cumpston, Jason Hochreiter, Kristen Ehringer, Mike Helbling, Don Splitstone, Sarah Quesen, Kelli Barr, and Paola Hernandez-Chavez; Mikhail Evstiounin and Cliff Spiegel for scoring the open competition atop of the hills; Sara Horsey and Suzanne Kinsky for scoring the women's competition atop of the hills; Cory Cannon and Alan Orlansky of Biketek for providing technical support for the lead group; Paul Pratt for taking video of the hilltop finishes; Frankie Ross, for agreeing to be a backup leader for the open competition group; Joey Stabile of Cycling Fusion for taking video; Ron Lutz and his son Eric and Dave Shaffer and his kids Izabella and Ezra for helping with the food stops; 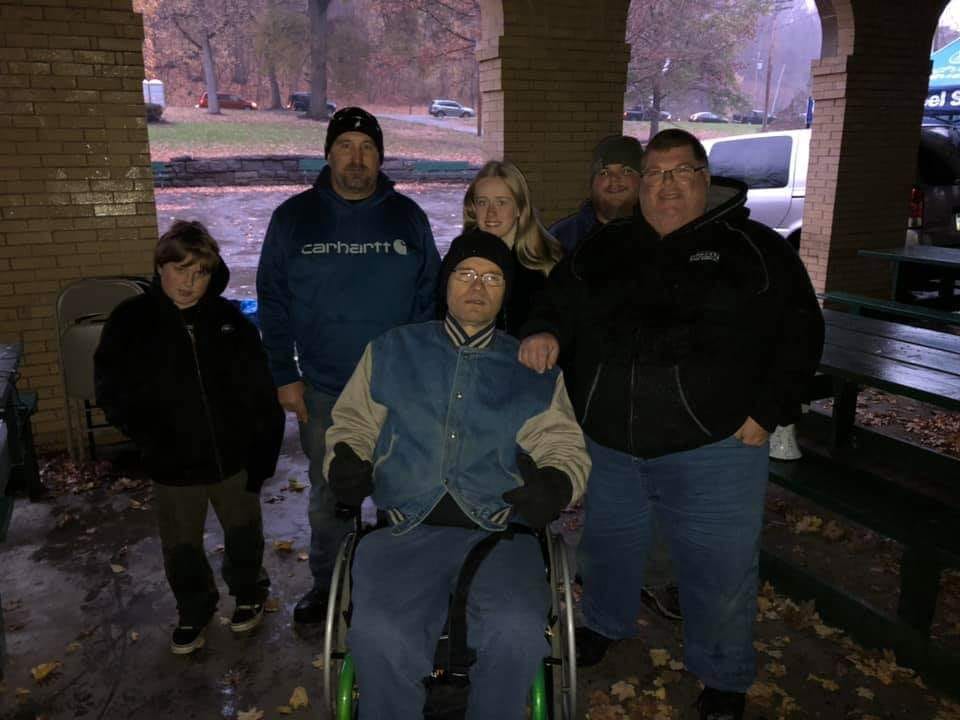 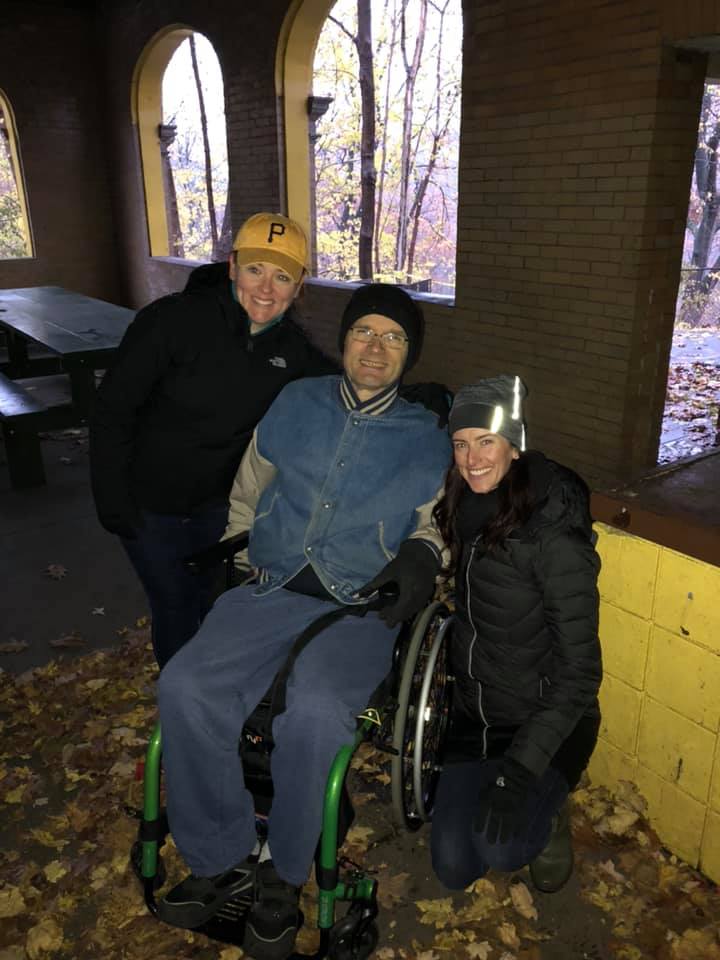 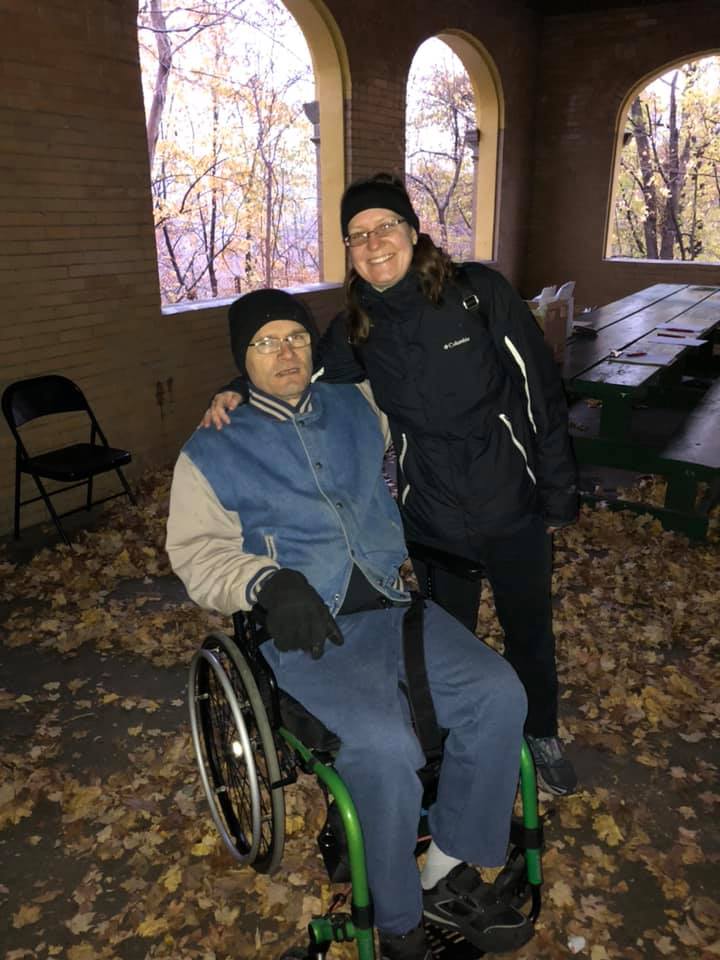 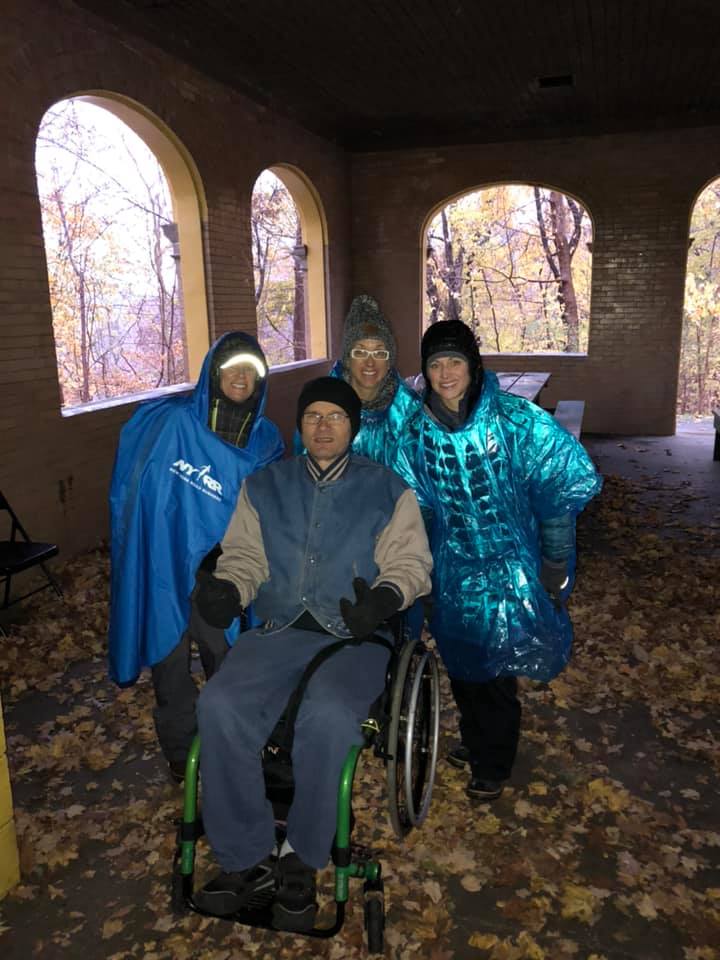 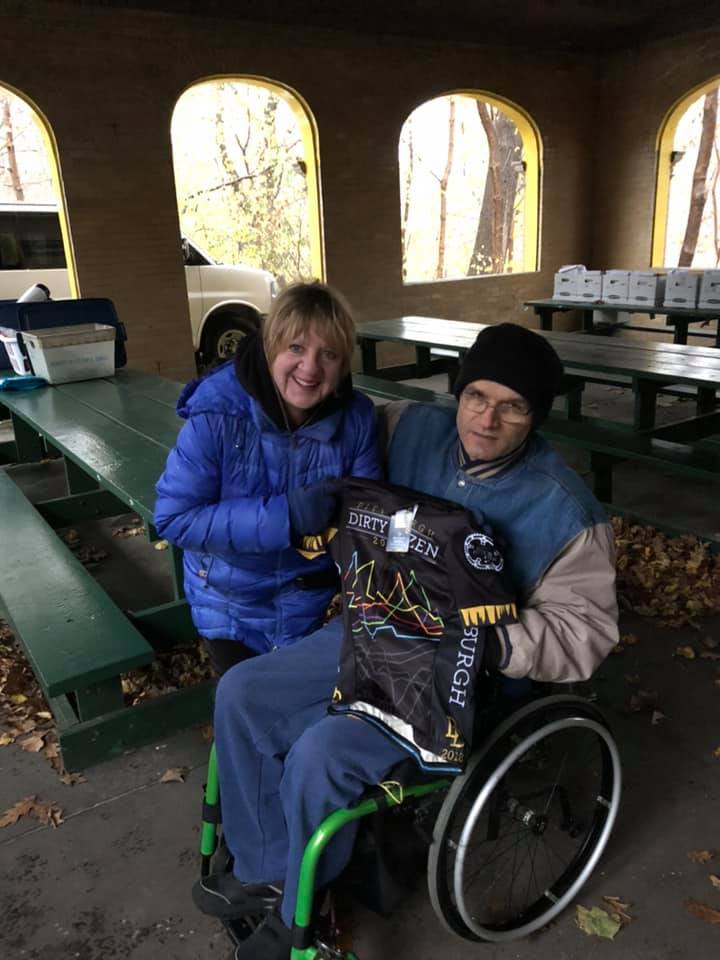 Thanks to Jerry Lynch for driving Jill Geisler and me around. Thanks to Jill for keeping me dry with a big umbrella.

*First-time rider
†Not an Official Finisher
^Non-competitor
If two riders end up with the same point total at the end then the tie breaker is who has more wins, 2nds, 3rds, 4ths, & 5ths, etc. if needed.

Thanks to Aero Tech Designs for creating the official 2018 Dirty Dozen jersey and donating a substantial portion of the sale proceeds to Danny.

Thanks to Biketek Pittsburgh for hosting Friday check-in and registration, and for providing a support vehicle to aid riders with mechanical problems.

Thanks to Cobden Street Block Watch and South Side Slopes Neighborhood Association and Giant Eagle for providing hot cocoa, coffee, water and a restroom at the top of Eleanor Street.

Thanks to Cycling Fusion for creating Dirty Dozen videos.

Thanks to David Norton for generously donating bananas to the riders.

Thanks to Eat'n Park Restaurants for providing Smuckers Uncrustables peanut butter and jelly sandwiches for the food stops.

Thanks to The Fireside Public House for hosting the after-party.

Thanks to Millvale Borough for letting us use their Riverfront Park and its facilities for the first food stop.

Thanks to NuGo Nutrition for donating lots of NuGo bars, which were very popular, as usual.

Thanks to Three Rivers Rowing Association for agreeing to give riders access to their facility in Millvale, though a water main break thwarted this plan in the end.