†Not an Official Finisher

If two riders have the same point total at the end then the tie breaker is who has more wins, 2nds, 3rds, 4ths, & 5ths, etc. if needed.

The 37th annual Dirty Dozen (DD) was held on Saturday, October 26th. The date was moved up a month from its traditional Saturday after Thanksgiving to greatly reduce the risk of ever having to cancel the event because of snow or ice, and so I don't freeze while watching it from my wheelchair. Under cloudy skies the starting temperature was 43° F and the high went to 57°, with rain starting just after noon. Before the 9 am start, I had a moment of silence for 38-year-old DD rider (2015 & 2016) Jason Zollinger, who on October 1st was hit and killed by a car while riding. His partner Danielle Shoup spoke and had a moment of silence for Tom Haykin and Austin Fike—also killed by cars while riding in the past two months.

The DD founders, my brother Tom Chew, Bob Gottlieb and I, have only ridden three DDs together—1983, 1988 and 1989. So for the first time in 30 years we were all together, and before the start each of us spoke about the amazing growth and evolution of the DD. DD head marshal Chris Helbling presented to Stephen “Steevo” Cummings and me lovely jerseys with our 11 and nine respective DD wins on them, with the years we won. Three hundred and forty-two riders started in seven groups leaving at five-minute intervals. I used to blow a whistle to signify the start of each hill. After my accident, my friend Jonathan Pratt took over this duty. Since Pratt couldn't ride this year, Chris Helbling blew the starting whistle for each hill. A huge congrats to Jon and Chris for doing so much for the DD!

In the open competition, defending champ Will Cooper did not ride. Twenty-two-year-old Ian Baun won his fourth DD in a very convincing manner. Leading the entire way, he won eight hills and had five second places. He set the record for highest men's point total (with a 10-place points system) scoring 125 points, and had it mathematically won after 11 hills. The real battle was for second place. Alec Ratzell was just 14 years old when he rode his first DD in 2012. This year, he beat rookie-of-the-year Daniel Uhranowsky, who won three hills, by just one point. The third-place finisher from last year, Nick Glavac, was in fourth place with 36 points after the first seven hills, but a flat tire on the eighth hill, Sycamore Street, caused him to quit. Matt Waller had scored 31 points by the time he got to the ninth hill, Canton Avenue, but he failed to make it up the wet cobblestones of Canton. Ryan Nye had 13 points when he got to the 11th hill, Welsh Way, but he was so exhausted that he stopped just shy of the top and was disqualified for failing to redo the hill. Three 60+-year-old riders scored points. Sixty-one-year-old John Brockenbrough extended his oldest-points-scorer record by another year with three points. Sixty-year-old David Hearn scored four points. DD founder sixty-year-old Bob Gottlieb scored one point.

In the women's competition, which was again run as a separate group, Stef Sydlik led the entire way and won nine hills to take her fourth DD victory, the most for women, but by her slimmest margin—just four points. It was the most competitive women's field ever. For the first four hills, the top four places were the same: 1. Sydlik; 2. Sharon Perry; 3. defending champ Shaena Ulissi; 4. Vera Wu. On the sixth hill, Rialto Street/Pig Hill, a truck was in front of the women, and Sharon stayed back at a safe distance, getting only five points for sixth place. This put Sharon and Shaena in a tie for second place. They went back and forth after this, with Shaena beating Sharon for second overall by just four points.

On Canton, Sydlik needed five attempts to make it on the wet cobblestones, so she scored no points, but kept her lead. In all four of her DD wins, she has never made Canton on her first try. In 2017, Sharon Rana—now Sharon Perry—got to Canton in second place behind Sydlik, but failed to make the hill. This year with lower gears, 47-year-old Sharon made it on her first try. Rookie Vera Wu got to Canton in fourth place with 56 points, but she failed to make the hill despite trying a record 12 times and falling back two groups. Fifty-one-year-old rookie Susan Musante placed fourth with 78 points. Suzanne Kinski, who marshalled the women's group, placed fifth with 58 points. Fifty-two-year-old rookie Mary Kowalski, who had never seen any of the hills, finished in sixth place with 44 points, and became the new oldest female points scorer.

Eleven of the 15 women in the women's competition made all of the hills, as did Paige Anderson, riding in the Enthusiast group. Twelve women making all of the hills is a new DD record! Coming all the way from flat Alexandria, Minnesota, Angie Johnson dedicated each hill to someone affected by multiple sclerosis, so they kept her fighting. The last hill was for her father Terry, who died from MS seven years ago at age 55. She finished in eigth place with 23 points. Jillian Beveridge scored 42 points, but failed to make two hills. Janel Nye scored 18 points, but failed to make Logan. Jen Damon, the only woman to finish last year—outside of the women's competition—rode in the competition this year and finished in 10th place with five points.

Steevo Cummings extended his record DD-riding streak to 17 years, the most of any active rider. Last year Jeremiah Sullivan finally finished the DD on a heavy Healthy Ride bike after three tries. This year, he rode a tandem (weighing about the same as a Healthy Ride) with Tyler Quinn. Sullivan said the tandem was much easier than the Healthy Ride, and while still not a walk in the park, felt a bit like cheating. On their first time up Canton, they snapped their chain. They fixed the chain and tried again. But on their second and third tries, their tandem malfunctioned again. While inspecting their tandem at the bottom of the hill, they noticed they were missing a bolt in one of the rear dropouts, leaving the dropout attached to the frame with only a single bolt, which had it pivoting on that bolt. Since they didn't have any bolts to fix it, and didn't feel that it was safe enough to continue, they exited the ride at that point.

The tallest rider to ever do the DD is 6' 10" tall Frank Curl. While his first three attempts to finish the DD on road bikes came up short, he was back this year on a mountain bike. He finally made all the hills, but felt like he was cheating using a mountain bike with super low gearing. At 280 pounds, he came close to breaking Don Snow's heaviest-finisher record of 285 pounds.

The after-party returned to East End Brewing, where the awards ceremonies were also held. East End Brewing was a great location for this, especially now that they can prepare food on-site.

Thanks to my niece Caitlin and her other uncle John Wachter for driving me around all day. Thanks to Alan Orlansky and Cory Cannon of Biketek for driving a technical support vehicle for the lead group. Thanks to all the marshals and rangers for keeping all seven groups safe. Thanks to the numerous other volunteers, many of whom are featured in the Photos section. 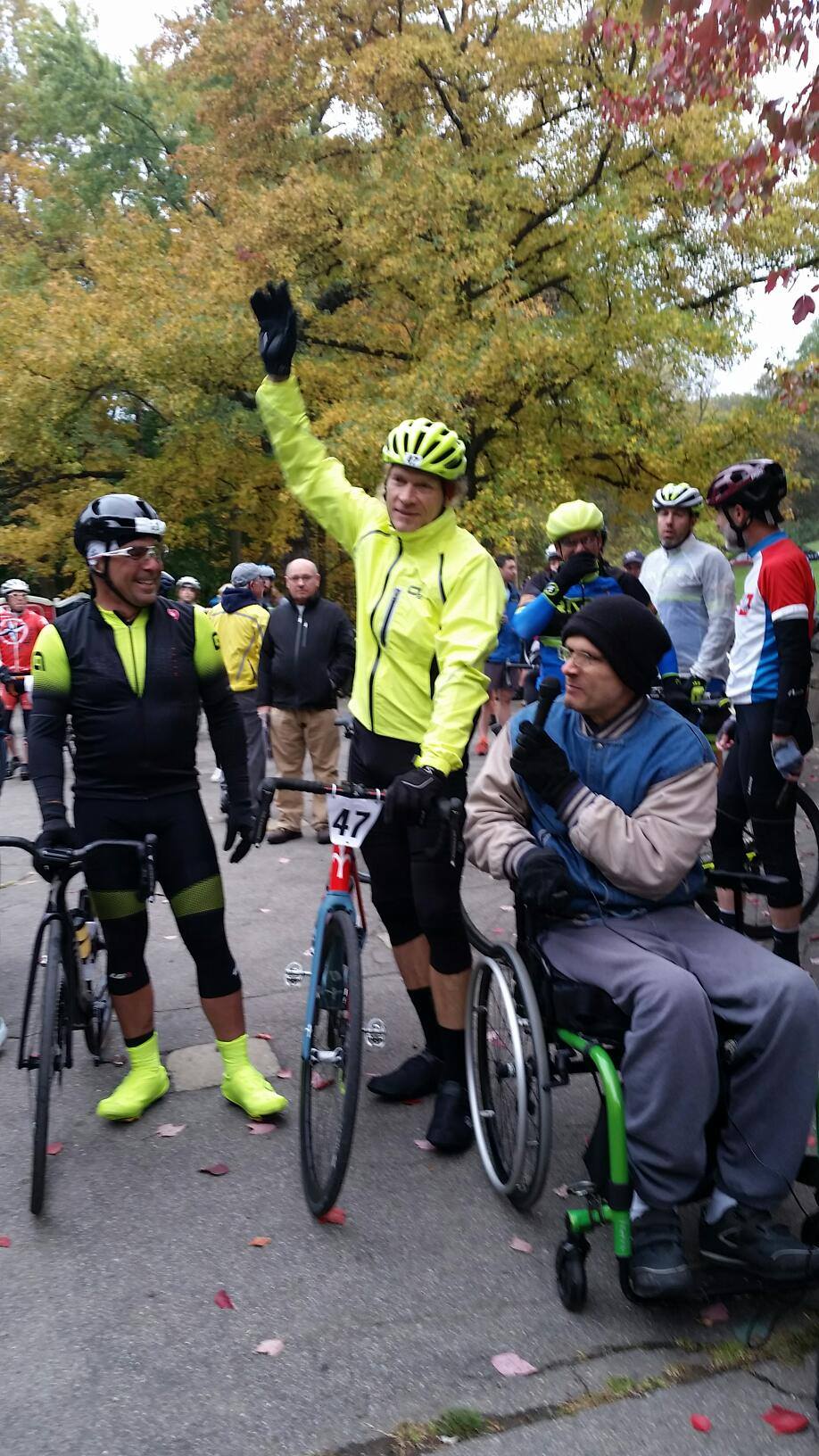 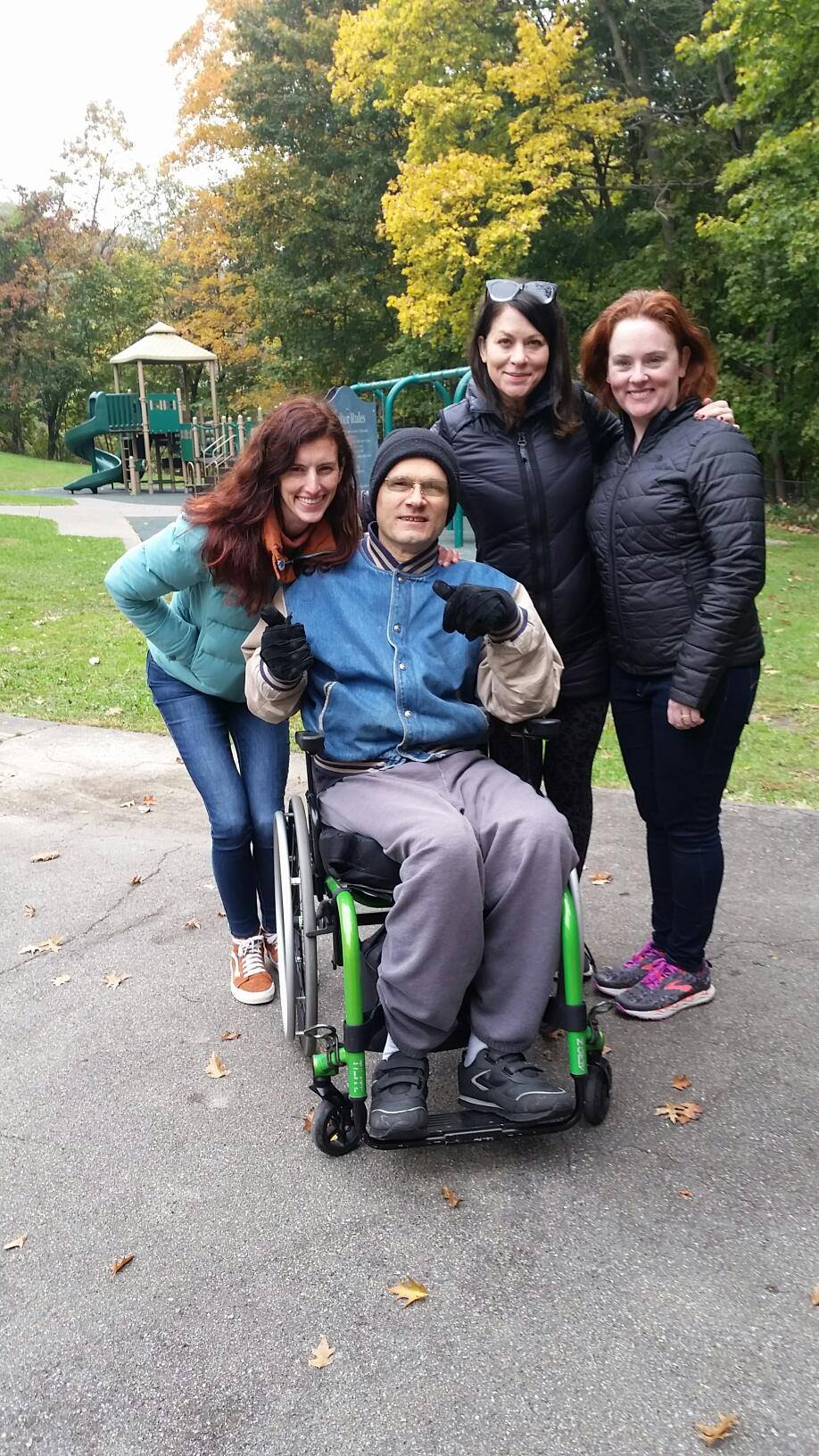 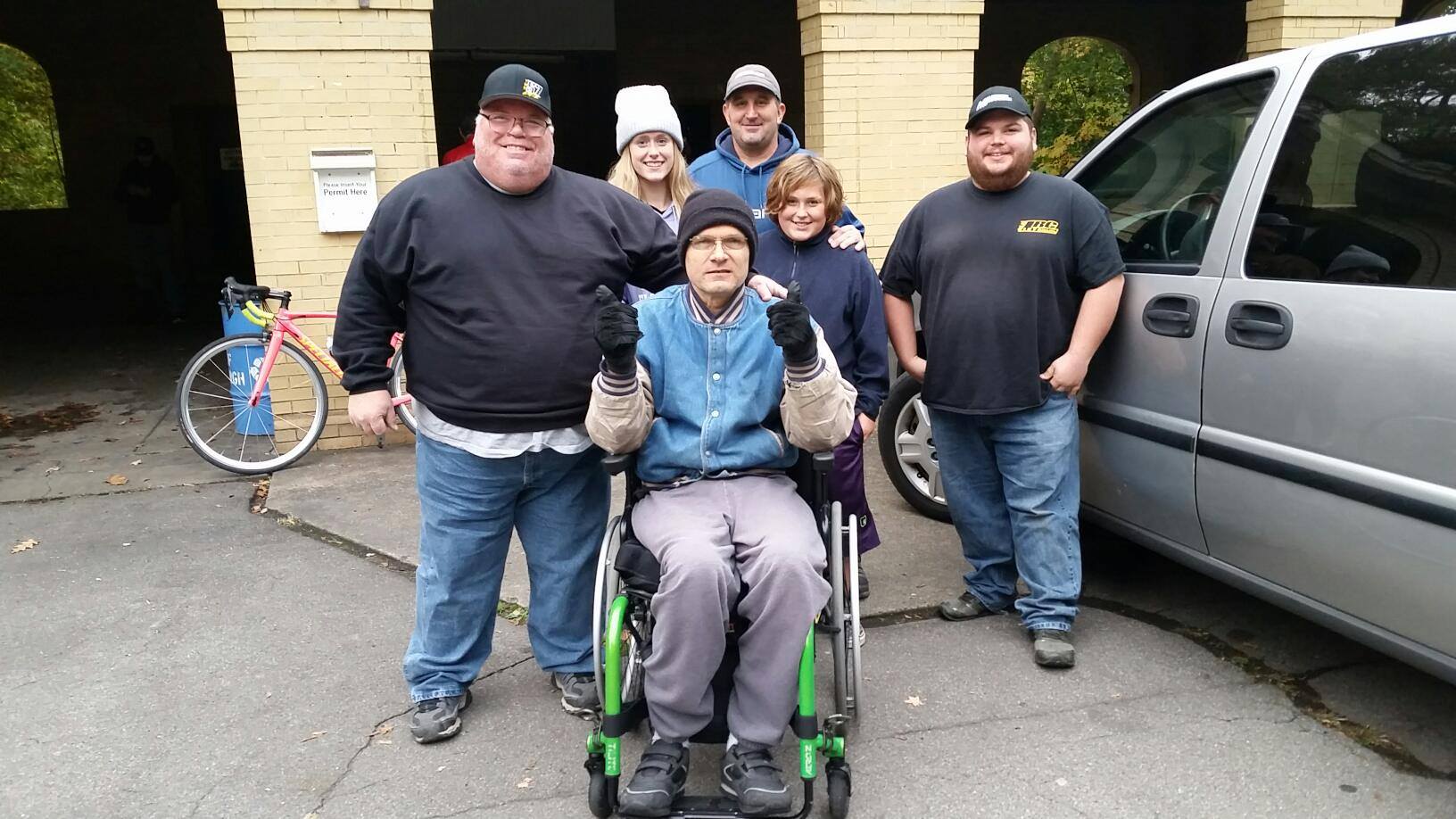 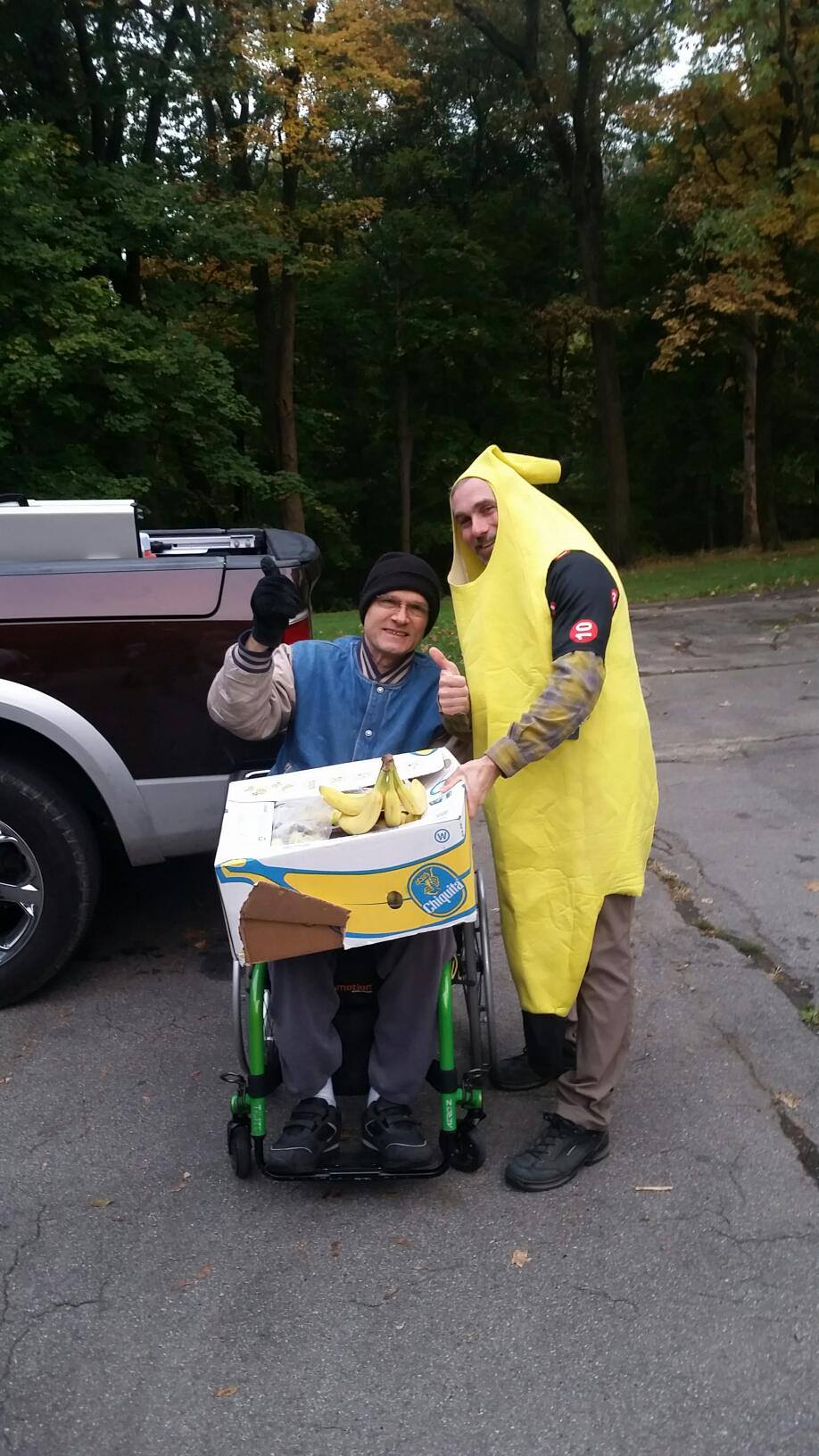 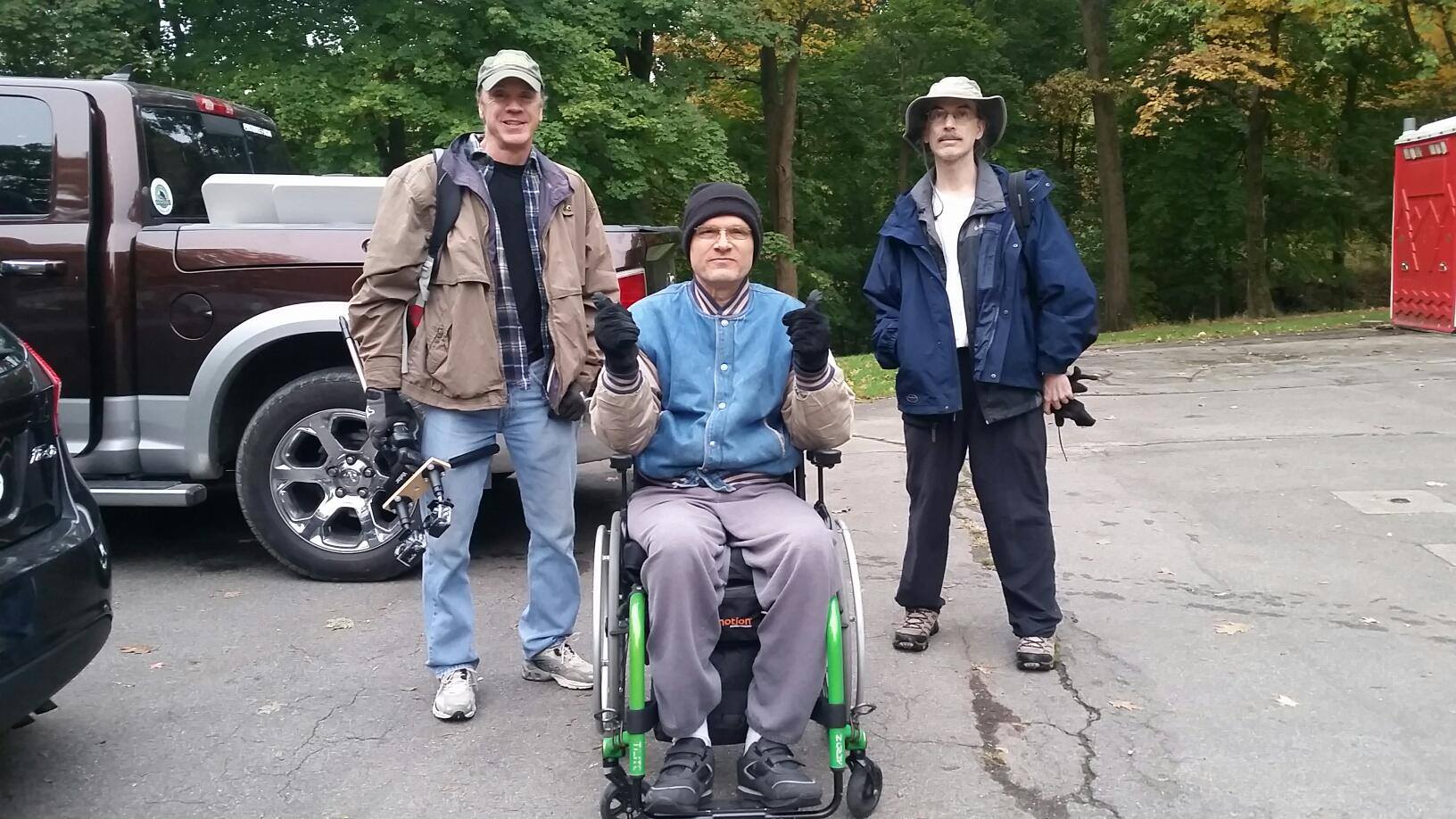 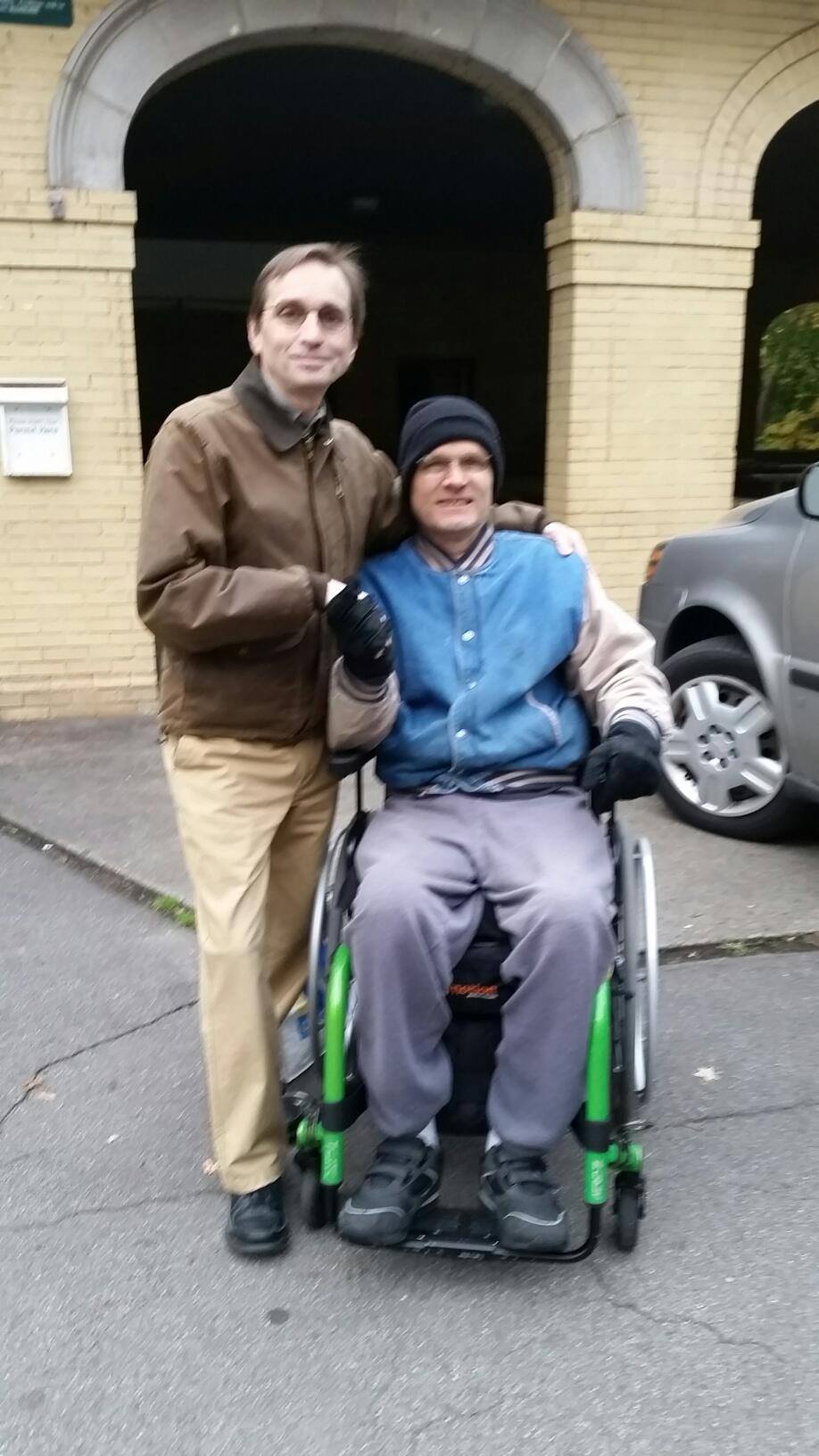 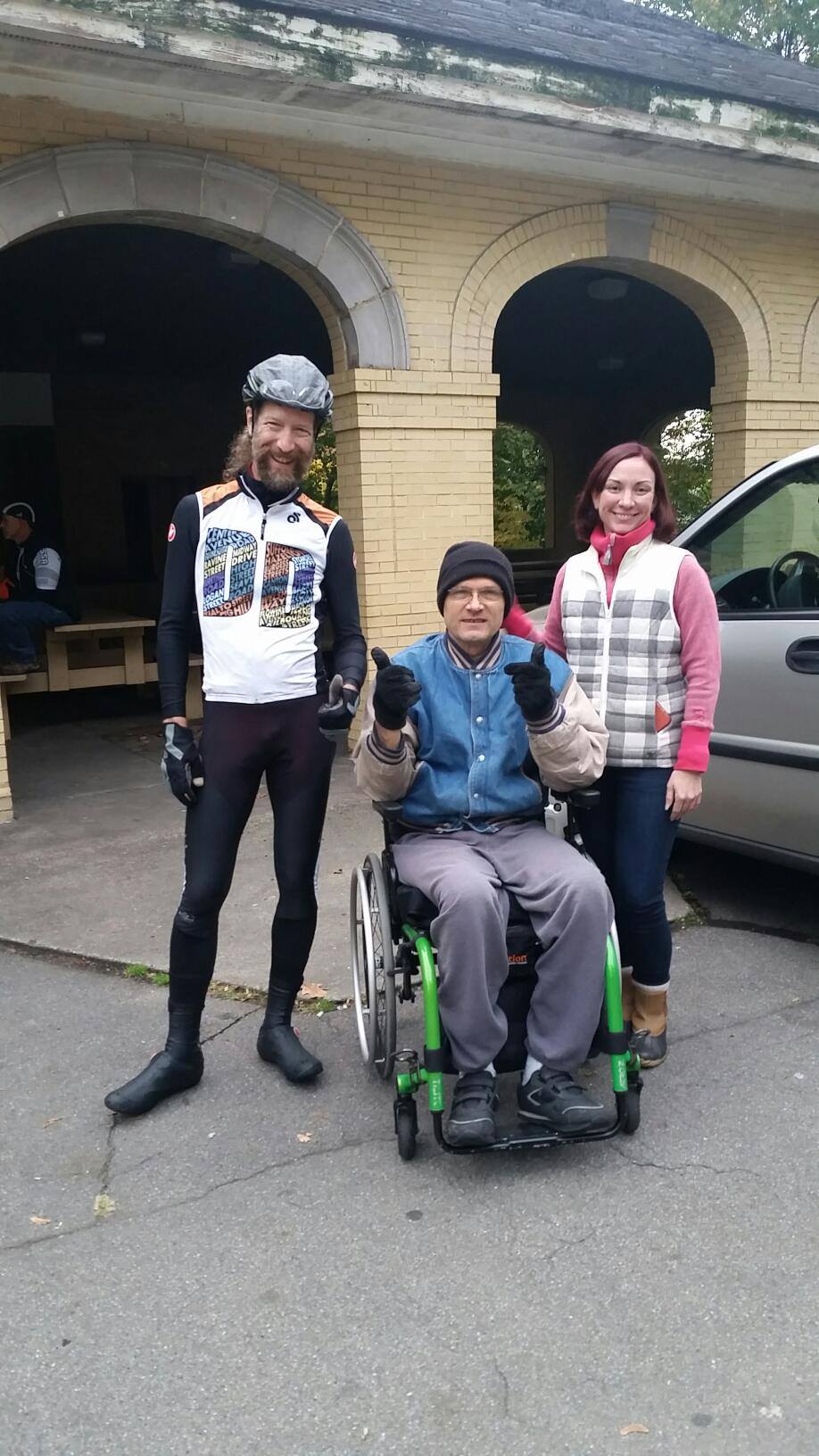 The Open Competition Group atop the eight hill, Sycamore Street. 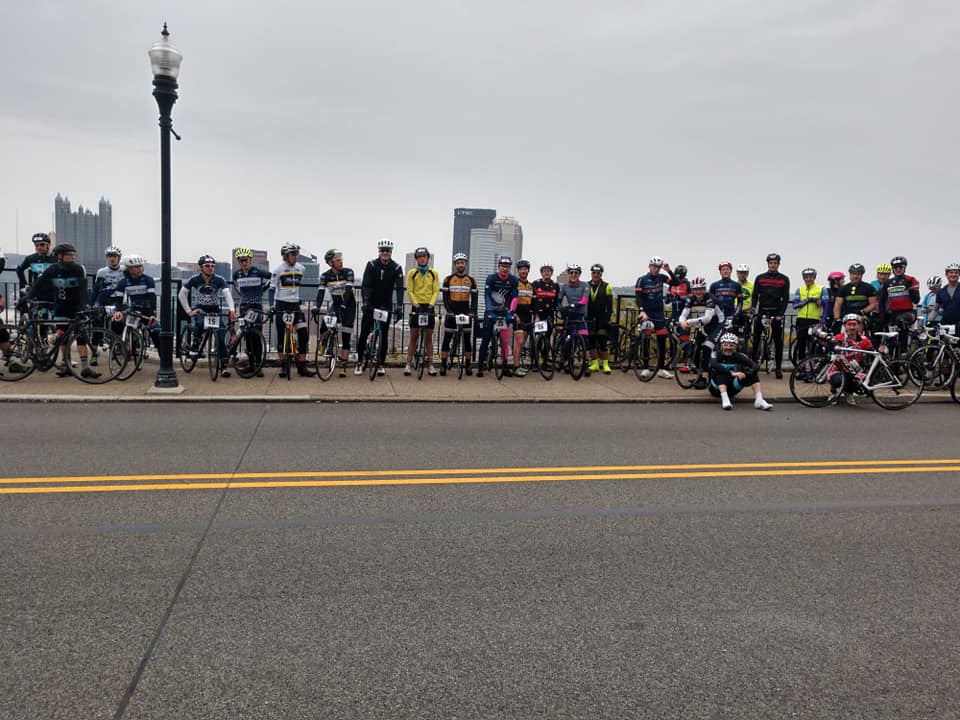 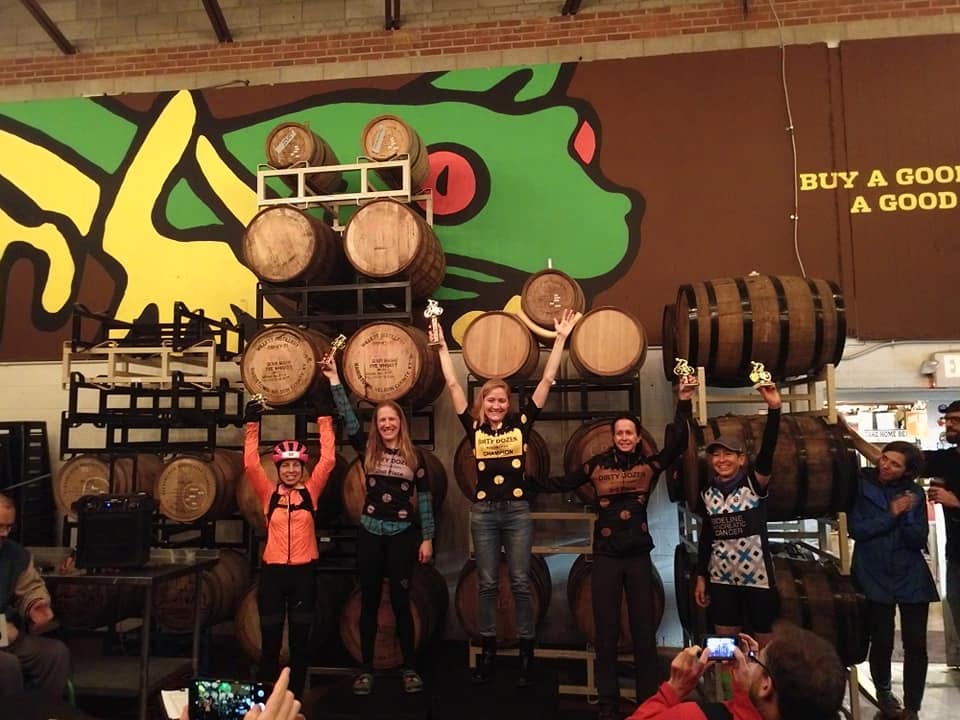 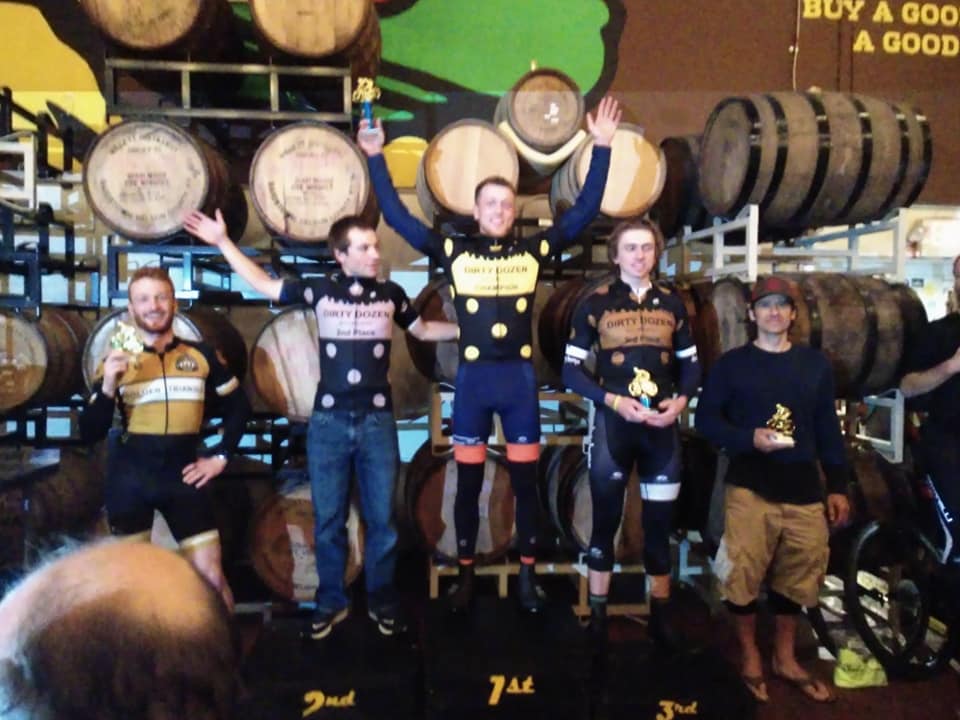 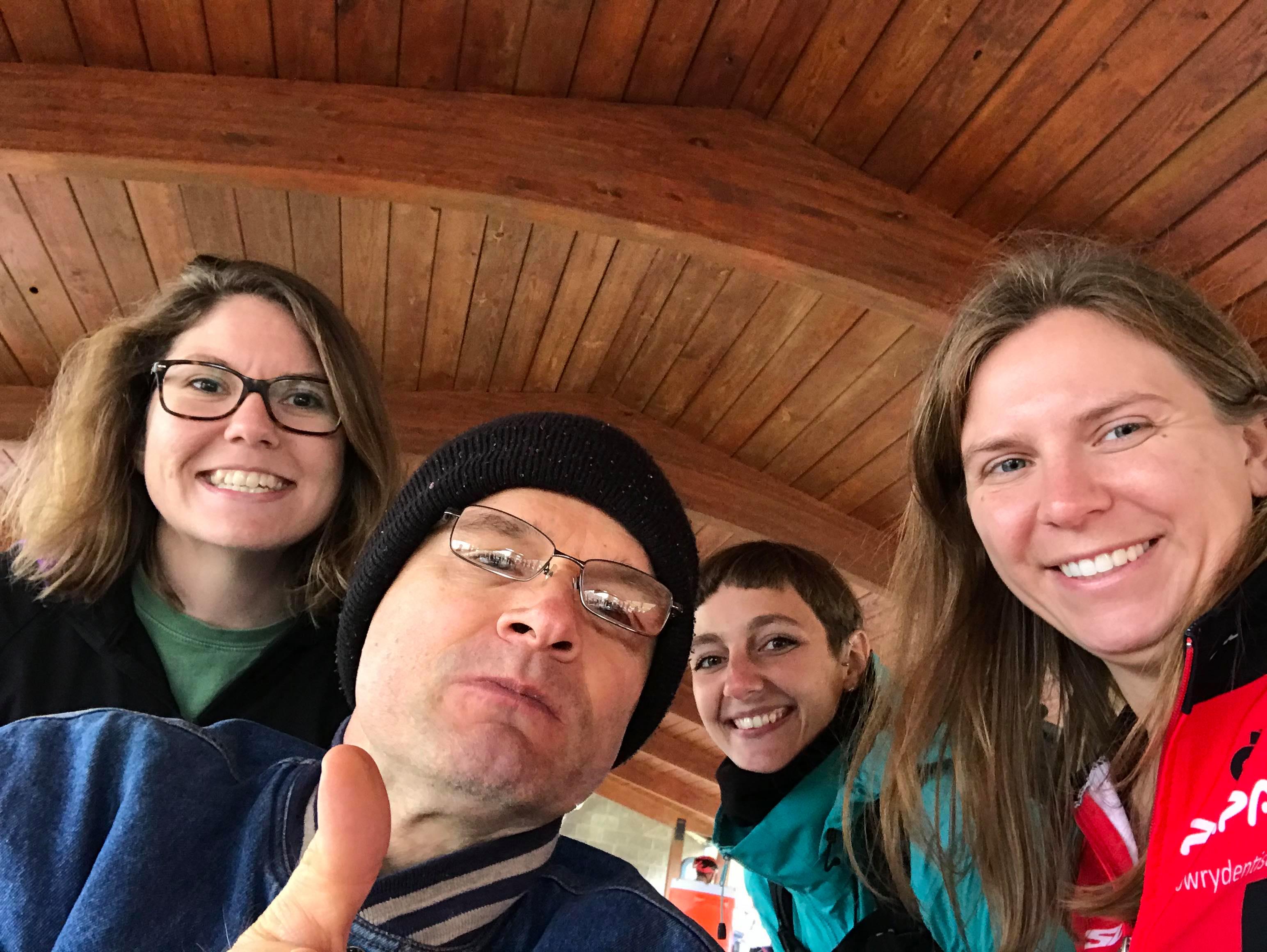 The three DD founders on Canton Ave: Bob Gottlieb placing 10th, Tom Chew placing 12th and myself cheering them on.

Thanks to Aero Tech Designs for providing bicycle keychains and for creating the official 2019 Dirty Dozen jersey and donating a substantial portion of the sale proceeds to Danny.

Thanks to Biketek Pittsburgh for hosting Friday check-in and registration, and for providing a support vehicle to aid riders with mechanical problems.

Thanks to Cobden Street Block Watch and South Side Slopes Neighborhood Association and Giant Eagle for providing refreshments and a restroom at the top of Eleanor Street.

Thanks to David Norton for generously donating bananas to the riders.

Thanks to East End Brewing for providing free tastes and for hosting the awards ceremony and after-party.

Thanks to Millvale Borough for letting us use their Riverfront Park and its facilities for the first food stop.

Thanks to NuGo Nutrition for donating lots of the ever-popular NuGo bars.

Thanks to Papar Bikes for providing a support vehicle for the event..

Thanks to Three Rivers Rowing Association for giving riders access to their facility in Millvale.